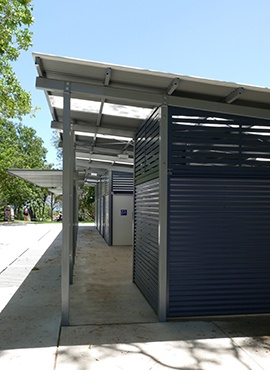 A multi-purpose facility designed and built by Landmark Products is part of a major redevelopment of a popular Agnes Water public park, and serving one of Queensland’s most northern surf lifesaving club.

The 157-square metre building is only metres from the beach in Tom Jeffery Memory Park, a park named after one of the town’s founders who established a cattle farm in the region during the 1950s.

A standout feature of the new amenities facility provided by Landmark are the perforated metal screens, finished with surfing imagery, providing privacy for users. These are complimented by powder-coated aluminium awnings over each screen.

On the beach side, there is a 50-square metre storage room with roller doors for the Agnes Water Surf Living Saving Club, an air-conditioned first aid room/office, and an access door between the two.

A service duct allows all toilet facilities to be concealed and protected, and Wonderglass roof sheeting provides natural lighting throughout.

Three external shower heads, each with stainless steel backing plates and 30-second wall valve line one side of the building.

“For the Agnes Water Surf Lifesaving Club it’s a big win but it’s also a big win for Surf Life Saving Queensland because we have our paid life guard service that operates there as well,” he said.

“We do treat a lot of first aid cases there, so it’s good to have a good facility that’s going to be close to the beach,” he said.

The storage facility was something Mr Holden was particularly excited about.

“The local club used to have a patrol shed/hut at that location but unfortunately it was going past its expiry date, we’ve always had plans to build a new one now,” he said.

“But with what’s happening now … we really can’t thank the council enough for including us in the project, as it’s saving us a lot of money.”*

* Comments courtesy of The Observer.